Our Missy left us for sunny AZ as a puppy to end up being returned when her loving mom Michele Obrien began the fight of her life with pancreatic cancer. Although we prayed she would win the battle God had other plans for Michele. So Missy came home at just a year of age to join the ranks of a show dog making Michele proud.  Missy Finished her CH in June 2017. 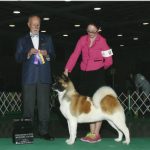 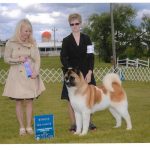